Why book with us?

Firstly we are both qualified for working in the outdoors holding nationally recognized qualifications. We have both been First Aid Trained, Sam is also a qualified First Aid Provider. Secondly and probably the most important, we are a small company with over 40 years combined experience operating in the Europe and the rest of the world. We divide are time between running courses and expeditions in the UK and Europe.

Sam has been working with groups in the outdoor for the last 17 years. Predominantly a rock climber and mountaineer she has also worked as a ski instructor, windsurfing instructor and is a qualified teacher.

Sam has lead expeditions to Kilimanjaro, the Arctic and worked for 3 seasons for the British Antarctic Survey. Serving, most recently, as Base Commander of Bird Island in 2010. She has climbed extensively in Spain, USA, Australia, Thailand and New Zealand.

Justin has been leading groups in the mountains since he was a young lad. He divides his time between his two passions biking and climbing. He is currently pushing his grades on the rock and exploring many stunning single track mountain bike routes.

Justin is a qualified mountain leader, rock climbing instructor, first aider, cave leader and kayak coach. He has climbed all around the world and is happiest on big walls with endless perfect rock. 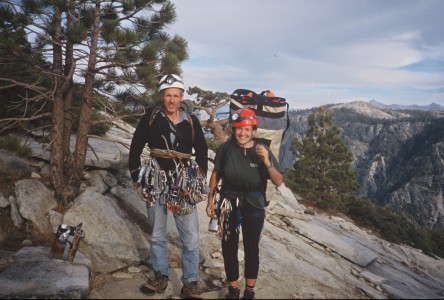 Sam and Justin at the top of the Nose El Capitan Yosemite. A ridicules amount of kit after four days climbing and three nights on the climb.

“Hi Justin, just wanted to say a big thank you for a great couple of days climbing with you. I really feel like I made some good progress on the ‘trad’ front. Climbing and company was excellent. I’ll certainly recommend you to friends”
Casey from Cambridge UK

“Five of us – two adults and 3 kids – met up with Sam for a day of rock climbing. Sam provided all the gear and tuition we needed and pitched (excuse the pun) it just right to get the
beginners climbing comfortably and provide some challenges to the ones who had climbed before. Highly recommended! We’re looking forward to doing it again next year”
Richard C from Manchester

“Thanks for the very nice tour with Sam through the Torrente de Pareis. I dreamed for years to walk it and now I’m glad I succeeded. Best wishes to Sam, I hope I’ll come back next year”
Cornelia from Germany

Hi Justin and Sam
“Just to say thank you for cranking me up some wonderful climbs. I enjoyed it hugely and you were a great guide, Justin. If you are ever back in Scotland do let us know, although if I was you I would stay firmly where you are as it is freezing here right now.”
David from Scotland

“Climbing with Justin was the highlight of my two week vacation. He’s super friendly, knowledgeable, and encouraging. I’ll be looking him up for another session if I’m ever back”
Josh T from the USA

“Had a great time learning to how to sport lead with Justin and Sam so much that I went back for another day! Very laid back but professional and safe. Easily the best part of my holiday, and the group day was fun for meeting new people. Thanks guys!”
Molly G from the UK

Mountain Bike Guidebook, “Great guide, I had truckloads of fun. And read the general instructions to the guide, I found them to be very helpful”
Christoph from Germany